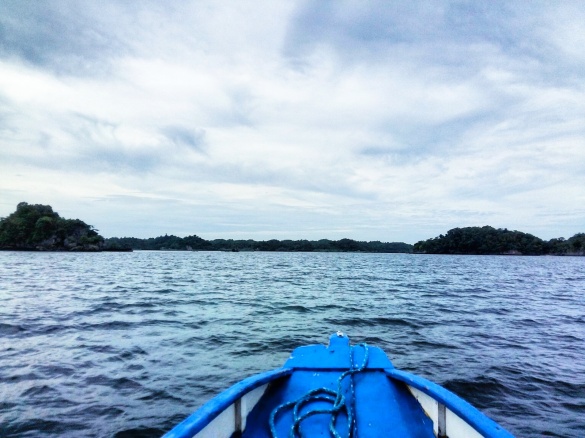 We stayed at Raymen Beach Resort initially because it’s one of the most recommended places to stay at when you are in Guimaras. One reason also is because they can arrange island hopping tours for you. Boat rates is at 500php for the first hour and 150php for succeeding hours. They say the tour lasts for about 3-4 hours depending on how long you want to stay in any of the stops. The thing about Guimaras’ island hopping is that you can do the tour even if you’re solo as long as you can afford it. We’re 2 persons on this trip and we have the boat all to ourselves, aside from the bangkeros. Diba, parang honeymooners. Hahaha.

#1: SEAFDEC – Southeast Asian Fisheries Development Center
We had a bit of marine science stuff and I don’t think my mind was fully awake and alert that morning. Haha. A research center for various species funded by different countries, it’s actually amazing that we have something like this in the country. We saw different kinds of fishes and some turtles too, but if there’s one thing that I won’t forget from this place was the foot spa with the giant bangus. Hahaha. I posted a video on my personal Facebook and I was literally screaming ‘cos it was so scary. Well, it just feels like puppies licking your feet anyway. Took me a while to become comfortable watching big fishes sucking my toe nails. 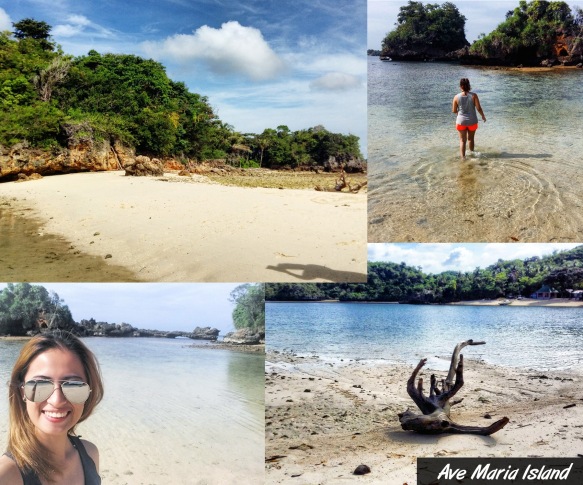 #2: Ave Maria Island
It was low tide when we got here so we weren’t able to enjoy the beach so much. But the sand is so fine and pretty! The good thing about visiting Guimaras at this time of the year is that you can enjoy the island tour with not much crowd.

#3: Baras Cave
It was my first time to enter a legit cave and it was a bit scary, considering that there are real bats flying above you. Haha. I had to use my flashlight ‘cos it was so dark and I’m worried on what I might step on. You can actually swim inside the cave but I wasn’t able to kasi matalino ako, I have my cellphone with me. Hahaha. 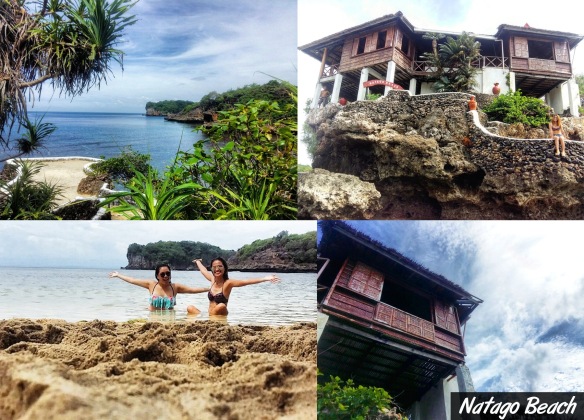 #4: Natago Beach
The only place I looked forward to see in Guimaras. I first saw a photo of this on Instagram and it was so pretty, even in real life. It’s a private rest house overlooking the sea. Imagine waking up with this view and having your coffee on a balcony like this. We learned that this is our last stop and we won’t be going to the other stops probably because there isn’t so much to see anymore. Like the Turtle Island for example, I asked our guide about this and he said that it has just become an ordinary island since there are no turtles anymore. So with that, we just decided to enjoy Natago Beach and stayed there for a few hours.

We ordered food the night before at Raymen’s Canteen and brought it with us since there are no stops where you can buy food or lunch. Lunch by the beach is probably the best lunch moments in the world, but having lunch with the beach all to ourselves is the ultimate #lunchgoal I must say. Hahaha. It was so peaceful and beautiful, you’d wish to stay there all day.

We had the island tour for 4 hours so it only costs 950php. I initially thought we’ll be on the tour for almost the whole day but being back at the resort at 12noon, we can actually head straight to Iloilo and be a day early in Bacolod or just stay in Iloilo for a night. Anyway, we just decided to rest and follow the original itinerary.

We weren’t able to enjoy the beach of Raymen Resort all because there are a lot of people when we were there. I’m assuming that it was because it was weekend that’s why it looks a bit crowded. We were thinking we should’ve stayed a bit longer at Natago Beach. Haha.

Raymen Beach Resort
The only place I’ve considered when I was planning this trip. Our room was fine, it was airconditioned plus it has cable TV. We were able to watch Mockingjay Part 1 before checking out. Hahaha. No hot shower though. They have a canteen and they serve good food for a very good price. They have souvenir shop, laundry services and billiard tables, plus they have wifi on some areas. They don’t have much open spaces because they have a lot of rooms. Beachfront is just so-so since they have neighboring resorts. Looks a bit cramped but well maintained.

We decided to check-out early since we felt like we have nothing else to do at the resort. There are a lot of tricycles waiting outside and it costs 250php from Raymen to Jordan Wharf. We opted to stay in Iloilo for a few hours before heading straight to Bacolod, good thing we were able to have a quick tour of the city, thanks to my dad for arranging people to pick us up from the port. Haha. My dad stays in Cebu for work and he has a lot connections in the Visayas area, although I did not like the thought of asking help from him upon planning of this whole trip. I just updated him thru text when we arrived in Guimaras and that’s it. He offered to book hotels for us (one in Bacolod and Dumaguete), and even asked people to pick us up when we get back in Iloilo and when we arrive in Bacolod. Hassle free life. Woot! So.. in case you want someone to help you tour Visayas, you can always ask me to tag along so we can have “connections”. Bwahaha.

We were able to visit few landmarks and famous spots in Iloilo City like the Iloilo Museum, Provincial Capitol, a bit of tour via vehicle around the city, then we decided to have lunch at Iloilo’s famous Tatoy’s Manokan and Seafoods. Btw, the original Tatoy’s is a very big restaurant near the beach somewhere in Iloilo.

There are a lot of things you can actually visit in Iloilo especially old churches and buildings, but we can have other time for that. It’s only Day 3 of our Backpacking Visayas adventure. At 1pm, we are ready to say our goodbyes to Iloilo. More exciting travel notes ahead!

Up next would be about the things you can do in Bacolod if you only have 36 hours!

Total Expenses for Exploring Guimaras with Iloilo Side Trips: P 4,936.00

What do you think? Cancel reply